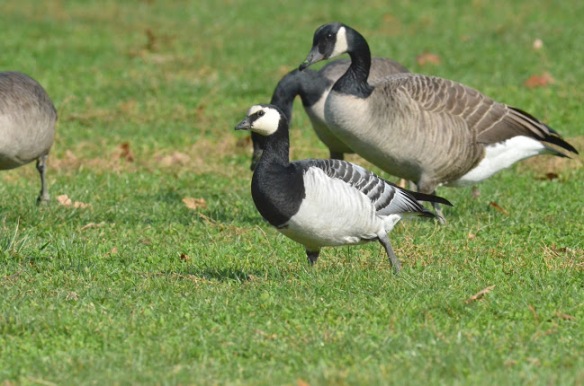 Yesterday evening an observation of a Barnacle Goose in the Inwood area came across on eBird. Though the person who submitted the observation on her list of birds did not provide more precise detail as to location, the physical description of the bird was entirely consistent with Barnacle Goose. A large flock of Canada Geese was also listed, so I assumed that the Barnacle was associating with it.

I decided I had to try to find this bird!

I knew that there were two places in Inwood Hill Park where geese tend to congregate. One is the baseball fields off of Dyckman Street on the west end of the Park by the Hudson. This is where I went first this morning. A dense fog made for very low visibility. At the northernmost end of the fields, around the picnic area, I found a flock of a dozen Canada Geese but no Barnacle.

The other place for geese is on the eastern end of the Park by the large inlet. I went there next and on the second baseball field north of the entrance by the tennis courts I found a large flock of Canada Geese. I scanned the flock and quickly saw the white-faced bird that stuck out: it was the Barnacle Goose!

I wrote back to Andrew Farnsworth — a Cornell researcher who helps manage eBird and who had been looking into this sighting — that I had found the bird. He put out an announcement on NYNYBIRD and then sped off to Inwood Hill. Despite a flat tire on the way he was first to arrive about an hour later at 11:35.

We got close views of the Barnacle Goose, which appeared healthy and had no band that might indicate origin from a farm or zoo. It was not bothered much by the baseball practice going on nearby.

I phoned Starr, who lives nearby in Inwood, shortly after finding the bird. She was on the scene quickly and mentioned that she knew of no other previous sighting of Barnacle Goose in Manhattan. A memorable morning for all involved!